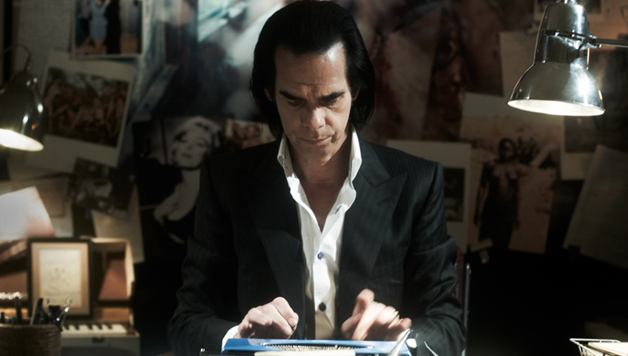 Strong nudity and sexualised imagery UK 2014 Directed by: Iain Forsyth and Jane Pollard Featuring: Nick Cave, Susie Bick, Warren Ellis Running time: 97 minutes Getting up close and personal with Nick Cave is many a music aficionado’s dream, as is glimpsing behind his famous façade. 20,000 Days On Earth rewards those enamoured with Cave’s considerable back catalogue, not to mention his screen and prose output, but it does more than preach his merits to the already converted. In smartly reflecting on the cult of his moody tunes, it also offers a feature steeped in the ephemera of creativity. British visual artists, Iain Forsyth and Jane Pollard, have created something far different from the usual rock doco for their first film. Courtesy of the titular concept, a fictionalised day is presented as the sum of Cave’s achievements to date. He collaborates with Warren Ellis on new music; spends time with his family; drives in the company of Ray Winstone, Blixa Bargeld, and Kylie Minogue; and reflects upon his life less ordinary to his therapist. His narration contemplates why his career came to be, and how he navigated sex, drugs, and rock and roll to emerge older, wiser, but not completely unscathed. That Cave is credited as a co-writer is unsurprising. To match the poetry of his songs and words, the directors take the atmospheric approach to their fly-on-the-wall concoction, further heightening its ethereal aura. In a compilation of striking sequences, we see Cave crawling through his studio, trawling through the archives, and erupting with sound and fury in a climactic concert. There’s ample indulgence, but there’s also humour, insight, and inspiration in understanding Cave’s work as the culmination of his experiences. The man, the myth, and the music could only have been captured in this way, in a revealing, thrilling doco-dramatisation hybrid that’s part portrait, part peering into the artistic abyss. Original Review: Sarah Ward, Filmink Extracted and compiled by: Gill Ireland