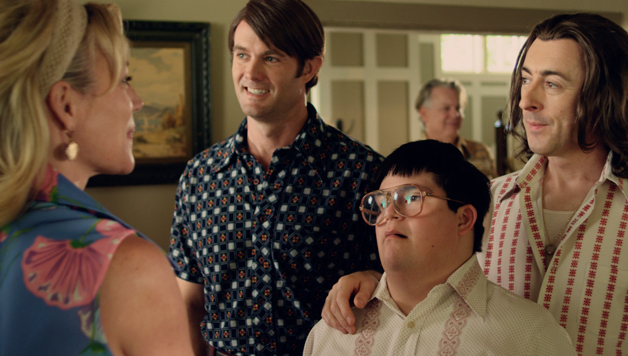 Set in the late 70’s the film begins with Rudy in the middle of a drag show with his two song and dance partners lip synching. He spots a young man at the bar, their eyes meet and hey presto, Rudy and Paul are lovers.

When Rudy finds the mentally handicapped Marco abandoned in the next door apartment, he simply takes him under his protective wing. Better that than the vagaries of the overworked and none too sympathetic Social Services department. As the time honoured truism says, no good deed shall go unpunished.

With Paul’s legal knowledge, they do the legwork to make Rudy a temporary legal guardian, with Marco’s mother’s written consent. But their sexuality becomes an issue for Paul’s boss and for the system, and fight as they might, they are beaten. Marco is the loser in this biased and bitter sys-tem, teaching Paul “there is no justice”, words that should have been the first he heard at law school, as helpful lawyer Lonnie Washington reminds him.

There are changes in everyone’s lives; Rudy gets to make a demo, thanks to a gift from Paul, and Paul loses his job. Marco is shuttled around, happy and safe only when with Rudy and Paul

It’s a sombre film, heartfelt and moving, a reminder that the weakest and most vulnerable in our society often pay the heaviest price for other people’s narrow minded, biased and uninformed, inhumane world view.