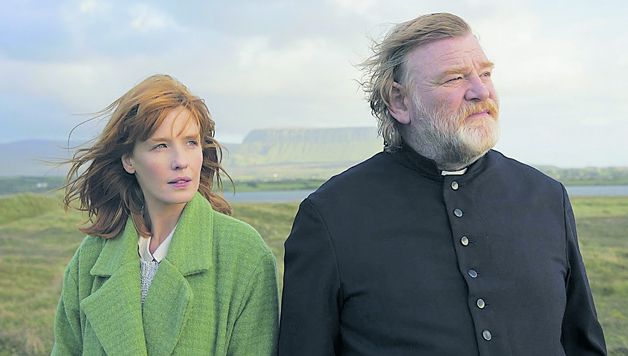 Strong violence, sexual references and coarse language Ireland/UK 2014 Director: John Michael McDonagh. Featuring: Brendan Gleeson, Chris O'Dowd, Kelly Reilly, Aidan Gillen, Dylan Moran, Marie-Josée Croze and M. Emmet Walsh. Running time: 101 minutes The remote Irish village where Brendan Gleeson’s quietly stoic Father James tends his restless flock seems surrounded by a crown of thorns, each soul within suffering in his or her own way. Faith is constantly challenged in the film, in ways that range from simple insult to outright physical threat. The latter comes in a confessional box right off the top as an unseen man, claiming he was repeatedly raped as a child by an errant priest, informs Father James that murderous payback will come one week hence, and the good padre himself must pay the price for the sins of his church. Father James sets out to find who wants him dead, and finds there are many people with grievances about the failings of Catholicism, none necessarily directed at him personally. When someone informs him, “Your church is on fire,” the statement has more than one serious meaning. The priest is aware of his own limitations and failings. A widower and recovering adult with an anxious adult daughter who longs for the fatherly attention she never received as a child, he wears his own metaphorical cross, fashioned from accumulated regrets and missed chances for genuine human connection. It seems everyone from a cuckolded butcher to a smartass male prostitute to a pompous rich man, and many more besides, has some issue they wish to take up with Father James. Nobody in the village is sacred, one character observes, but “some are less sacred than others.” Original Review: Peter Howell Toronto Star Extracted and compiled by Peter Gillard.