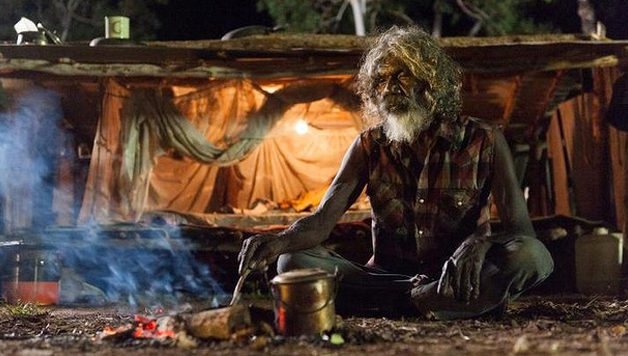 Mature Themes and Coarse Language Australia: 2014 Director: Rolf De Heer Featuring: David Gulpilil, Peter Djigirr, Luke Ford, Bobby Bunungurr Running time: 108 minutes Blackfella Charlie is getting older, and The Intervention is making life more difficult on his remote community, what with the proper policing of whitefella laws that don't generally make much sense, a government crackdown has taken the fun out of life. The cops confiscated his gun, then his spears (dangerous weapons), his catch (a water buffalo), they offer poor food and won't give him a home, they won't let him drink and by ironic intervention, make him help catch his dope dealer. Charlie's kin seem more interested in going along with things than doing anything about it. So Charlie takes off to live the old way, but in so doing sets off a chain of events in his life that has him return to his community chastened, and somewhat the wiser. The crux of the film's journey is one in which Charlie fights against the establishment that threatens his instinctive life. His plans don't stack up. An initial reunion with his country soon leads to pneumonia, a hospital stay in Darwin, access to grog, and a spell in jail. It seems the white man is always there to trip him up, but not to catch him when he falls. Charlie's Country is a heartfelt experience born of frustration, a film that is at its best in the bush, at its most obvious in town. There's no room for subtlety when discussing the unsustainable relationship between white and black Australia. Set against the stunning landscape of Arnhem Land with Gulpilil front and centre, his precise wit keeps this from simply being an angry jab at authority. Charlie's Country is a warm and reflective account of a man struggling to retain his dignity in a fading culture. Original reviews Louise Keller-Urban Cinefile and Colin Fraser-moviereview.com.au Extracted and compiled by Janez Zagoda