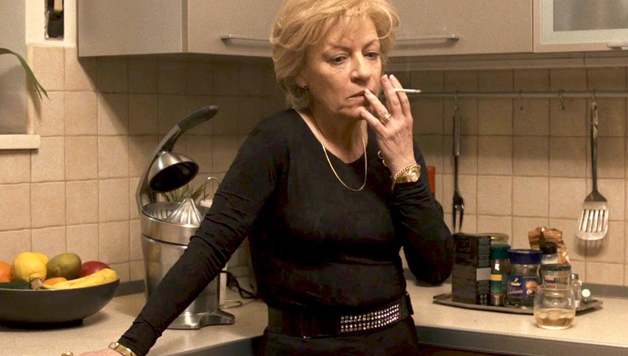 Luminita Gheorghiu dominates every scene as Cornelia, a nouveau riche Bucharest matron - chain-smoking, bottle-blonde, hard as nails - whose job as a set designer suggests both her eye for detail and her knack for arranging things to suit herself. With her doctor husband in the background, Cornelia's attentions are focused on Barbu , her downtrodden adult son. In his 30s, he's finally found the courage to move in with his girlfriend - but when he faces jail over his involvement in a horrific accident, Cornelia seizes the chance to assert her dominance once more.

The film is a morose deadpan comedy in which the main joke is the appalling way everybody carries on. There are several contenders for most cringeworthy scene, including one in which Cornelia gives Barbu an intimate back rub - her use of a surgical glove makes this all the creepier - and another in which she learns more than any mother should about her son's sex life.

All this is filmed in a seemingly neutral, fly-on-the-wall style: the handheld camera swings back and forth, following the action like a spectator at the tennis. But the approach is more artful than it appears, particularly when Netzer finds realistic ways to put image and sound in ironic counterpoint as, for example, a key scene at an opera rehearsal allows Cornelia to make a dramatic exit mid-aria.

It's clear from very early on that Cornelia is a terrible person, but this doesn't stop Netzer from hammering home the point. On the other hand, the epiphany that rounds things off is less than persuasive - though it's good to see that change is sometimes possible, even in Romania.