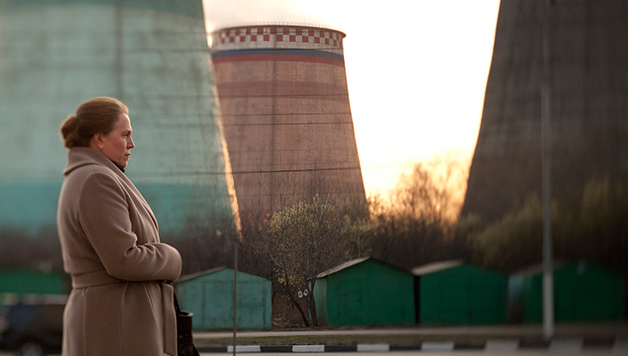 Elena is the second wife of Vladimir,a retired businessman of means. They live in a posh penthouse apartment in Moscow, sharing the same bed from time to time but keeping separate bedrooms. Their individual children are the only source of friction in their lives. Her son Sergey,from a previous marriage, is an unemployed ne'er-do-well with a teenage son and a baby; Elena helps them out financially, but it's a sore subject with Vladimir, who wants nothing to do with Sergey. When Elena asks him for money to help Sergey's son Sasha get into university to avoid the army, Vlad refuses.

Elena, in turn, disapproves of Vlad's daughter Katya a drugtaking party girl who lives off Vlad's money but rarely comes to visit. Then Vlad suffers a heart attack -- and announces to Elena that he's finally going to write a will. Said document will leave her their apartment and an annual annuity -- but will bequeath the bulk of his money to Katya. And no, once again, he will not help Sasha with the university funds.

So Elena, who met Vlad when she was a nurse and he suffered an attack of appendicitis, begins to think the unthinkable. How can she get rid of Vlad before he writes that will -- with the lawyer set to arrive the next day?

While an unmistakable example of high-end, slow-paced art cinema, Elena stands out by harking back to classic noir thrillers, especially those in which inconvenient, wealthy husbands stand in the way of their wives' financial imperatives. The story reminds us that (Russian) crime doesn't always lead to punishment. While specific in its attention to detail, the film has wider, damning implications for Russian society and beyond.