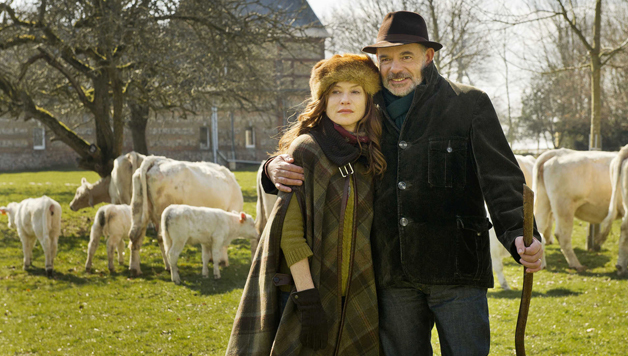 (La Ritournelle) Coarse language and drug use France 2014 Directed by: Marc Fitoussi Featuring: Isabelle Huppert, Jean-Pierre Darroussin Running Time: 98 minutes Folies Bergère isn’t, as the title might suggest, about the legendary nightclub, or the glamorous fin-de-siècle Parisian lifestyle that it suggests. Instead, it’s about a literal bergère – or shepherdess – whose follies puncture and play around with the haute aspirations of arthouse French cinema. As Brigitte Leçanu, Isabelle Huppert is more or less in Bovary parody mode, dreaming of a life beyond her husband Xavier and his cattle farm that takes her up to Paris for the weekend, where she has a brief flirtation with one of their young rural neighbours, along with a businessman that she meets in her hotel. At one level, that makes it a bit of a vicarious Parisian holiday for her audience as well, but it’s a holiday that skewers Paris’ highbrow pretensions as it unfolds, taking us through a late New Wave city that doesn’t really feel that exotic, or even that cultured, and certainly doesn’t guarantee the kinds of endless erotic satisfaction and rumination that you find in so many films made about French people for foreigners. The Director sets Huppert’s body and face to the most retro moments of recent dance music – until she feels quite ageless and free, finding her youth so unexpectedly and joyfully renewed that she doesn’t even really have to look back upon it. And joy is very much the register and point of the whole film, which is comic in a grand, quite old-fashioned way, beginning and ending happily, and giving Huppert license to put aside her masochistic austerity to just goof off and have a good time with one of the most contagiously silly characters of her career. Original reviews Billy Stevenson; A Film Canon Extracted & Compiled by: Gill Ireland