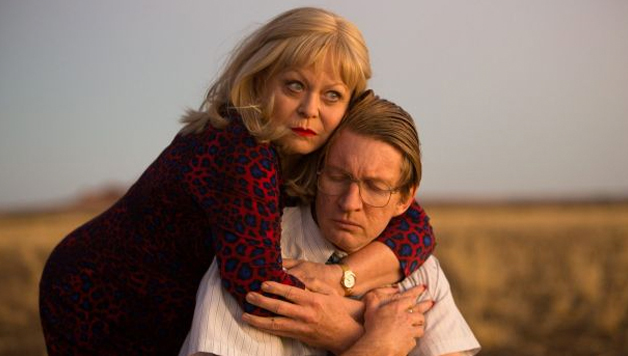 Ivan Sen’s Goldstone is impossible to shake. From the first minute, the film comes at you with images layered across the screen from the 1800s Australian gold rush era. The pictures, filled with the hardened faces of those extracting “the colour” from the earth, are evidence of post-colonial exploitation. Aboriginals “civilised” in western clothing; Chinese migrants being used as cheap labour. The red dirt blankets the foundations of modern Australian civilisation: gold, exploitation and invasion. Goldstone is the battleground for Australia’s soul.

Jay Swan rolls into Goldstone like a beer soaked tumbleweed. He lands in the middle of a mining conglomerate’s local expansion. All that’s left is the rubber stamp of approval from the presiding indigenous council. The Mayor, on orders from slimy mining boss Johnny is doing whatever she can to convince the council and local cop Josh that it’s the right thing for the community. Jay arrives in this town looking for an Asian girl, who was reported missing via a hotline. Seconds into his time on the mission, on the outskirts of town, you get a sense immediately that something has drawn him to this place beyond the case.

Miners being squeezed to work ungodly hours and industry (booze and prostitution) spawning in their wake. That prostitution is human trafficking of Chinese migrants, who are required to pay for their passage to Australia by servicing the miners. Mrs. Lao plays the stone-faced madam and instrument of fear for the mining company.

Josh is the perfect contrast to Jay. Josh is ill-equipped to navigate the treacherous waters of working within an indigenous community he doesn’t understand, and alongside a mining group that is willing to suffocate you with money to turn a blind eye. He does a great job of walking the treacherous trapeze wire. When Jay plants the seed that something sinister is going down on his “watch” he forms a connection with May.