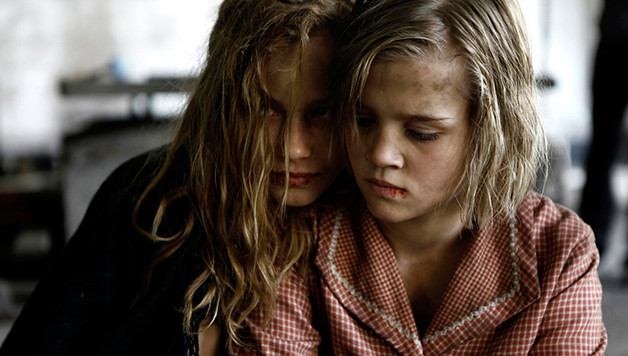 Strong themes and infrequent violence Australia/Germany/Britain Director: Cate Shortland Featuring: Saskia Rosendahl, Nele Trebs, Andre Frid, Kai-Peter Malina Running time: 104 minutes Australian Director, Cate Shortland (Somersault), explores the themes and subject matter of Rachel Seiffert's novel “The Dark Room” - the shattered, inexplicable nature of self for children of perpetrators - in this case, Nazis. Despite the storytelling structure, it is clear to us what is happening and why. The emotional journey is of greater import than the physical one, which the five siblings undertake in the immediate aftermath of the end of World War II, seeking to reach the haven of their grandparents' house in Hamburg, all the way from the Black Forest. Lore is old enough to know something of the political setting of her high ranking German SS father, but too young to deal with the real life ramifications of it. The impact of her confused emotions is underlined when she and her siblings are helped by a young stranger - who turns out to be a Jew - Thomas (Kai-Peter Malina). The entire cast, including the youngest children, deliver riveting, authentic performances, even the hungry baby who has a lot of crying to do. The often incomprehensible behaviour of human beings is taken from the book and left as observations, with no attempt to somehow resolve them. That's why many mainstream audiences might find the film confronting, used as we are to films wrapping up the loose ends. Real life doesn't have that much wrapping... Shortland's film speaks in images as much as possible. This is where audiences are allowed some respite from the dense and intense atmosphere of 1945 Germany, where life is dangerous and survival can depend on terrible decisions that are made. Adam Arkapaw's cinematography is sensitive and provides us with beautiful images as well as painful ones. Together with Max Richter's score, Lore is given every opportunity to engage and haunt our cinematic memories. Original review by Andrew Urban, urbancinefile - Extracted by Sally Oetterlli