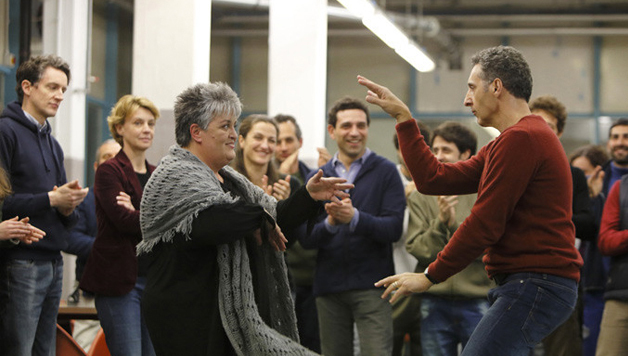 Margherita is a harried film director in the middle of making her latest political drama – a dreary-looking story about rioting factory workers. She’s struggling to keep her mind on the job because her beloved mother, Ada, is in the hospital, growing weaker by the day. Meanwhile, Margherita’s live-in-lover is moving out, accusing her of coldness, and her teenage daughter, Livia, is failing Latin at school.
Rushing backwards and forwards from film set to hospital ward, it’s no wonder Margherita has anxious dreams of flooded apartments, heated arguments and minor car accidents. Or are they dreams? They’re so intricately woven into realistic scenes that we’re not always sure. Her visits with her mother’s doctors are also exercises in confusion as she tries to understand the medical lingo, as if by doing so she might prevent the inevitable.

In stark contrast to this hectic denial, Margherita’s brother, Giovanni seems calmly accepting of the fact he must put aside all other tasks, and even quit his job entirely, to help his mother die.

Whether the brilliant and charismatic Barry Huggins belongs in this movie is debatable, but there’s no doubt he steals the show, providing welcome comic relief as a mouthy, high profile American actor brought in to star, but unable to remember a single line or follow direction. Barry’s manic energy and mammoth ego add colour to the somewhat drab production. A scene in which he tries to drive a car, directed by Margherita through remote microphone on a trailer in front of him, is comic gold.

There is a sweet moment when Margherita and her ex-husband teach their daughter to drive a motor scooter, to the strains of Jarvis Cocker’s ‘Baby’s coming back to me’. It’s as if in these rare moments, the meaning that eludes the director is right in front of her, yet she’s too busy – like the film itself – to see it.