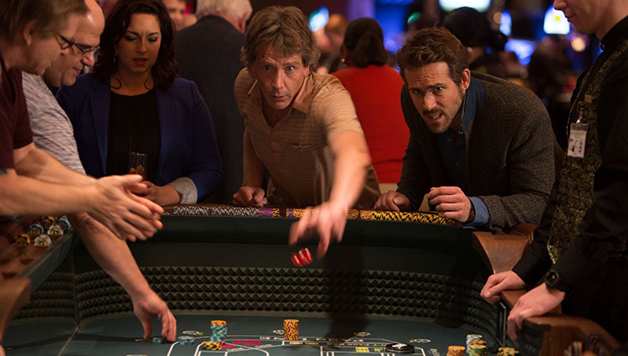 Mississippi Grind is a rarity: an American movie about gambling that actually acknowledges that when you stay up all night in a badly lit room, your skin is likely to become very clammy and blotchy.

Gerry is a lowly real estate agent with a serious gambling problem. His continual “bad luck” and inability to call it quits has him facing a huge debt, not to mention it’s the reason his wife and daughter walked out.

In comes Curtis, a fast-talking drifter who loves darts, drinking and flirting with women. After bonding over bourbon and betting, the two men venture south towards New Orleans so Gerry can make them some serious money playing poker.

Is Curtis really who he says he is? Is he even real? Will they turn on one another? And just how far down this rabbit-hole can they both continue to fall before they turn it all around or completely lose it all? These questions sit with you during the entire film, as you wait for something either really good or really bad to happen to one of them. But as Curtis says to Gerry towards the end of the film, “This is how it had to end.”

Without giving away whether or not they win, lose or something else entirely happens, the ending is never quite what you think it is, which is very rare these days.

In a way it’s like a mature version of Rounders, in that the friendship between these two characters is what drives the film, but the real fun lies in spending time in the seedy bars, casinos and underground gambling dens.

Perhaps this is why the life of a hustler has always been fascinating to watch, particularly when you know the anti-hero of the film isn’t likely to walk away when we all know they should.

Definitely worth a watch, if only for the stellar performances of the two leads and an incredible deep southern blues soundtrack.