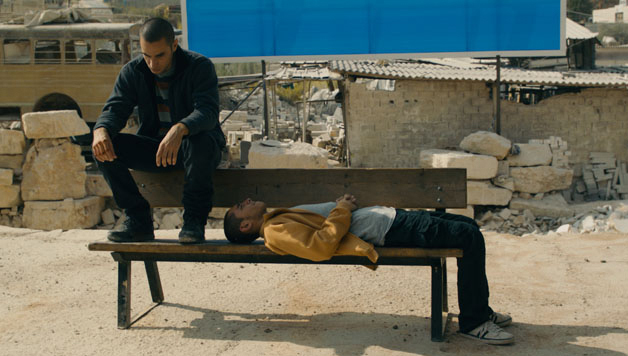 Mature themes, violence and coarse language Palestine 2013 Director: Hany Abu-Assad Featuring: Adam Bakri, Leem Lubany, Iyad Hoorani, Samer Bisharat. Language: Arabic, Hebrew Running time: 98 minutes This punchy social melodrama from Palestine grabs attention from its first scene. The long-limbed young protagonist Omar is shown using a rope to scale the separation wall running through the West Bank. When he reaches the top, gunshots sail past him: blam, blam! Quick as he can, he slides down the rope on the other side and flees. A baker by trade, Omar is in love with Nadia, who lives with her family on the far side of the wall. Partly to stay close to her, he joins a militant group led by Tarek, her protective brother; the third member is the clownish Amjad, Omar's romantic rival. These guys have known each other since childhood, and tensions between them are at first submerged in their friendly teasing. Of course, it can't last: after the trio succeed in carrying out a hit on a soldier, Omar is captured and tortured by Israeli security forces, then sent back out onto the street to serve as an informer. From this point, we can't be sure which side he belongs to – but neither, perhaps, can he. What's certain is that he's playing a losing game, trying to ad-lib his way out of a trap that continues to tighten. Frequent close-ups of his face don't reveal his thoughts so much as suggest the claustrophobia of a world where a threat might come from anywhere. For someone in Omar's position there are no right choices. In other words, the problems of society can't be fixed by individuals; the fact that no one here is a simple villain – even a ruthless interrogator is just doing his job – only adds to the sense of despair. Original Review: Jake Wilson - Sydney Morning Herald Extracted by Peter Gillard