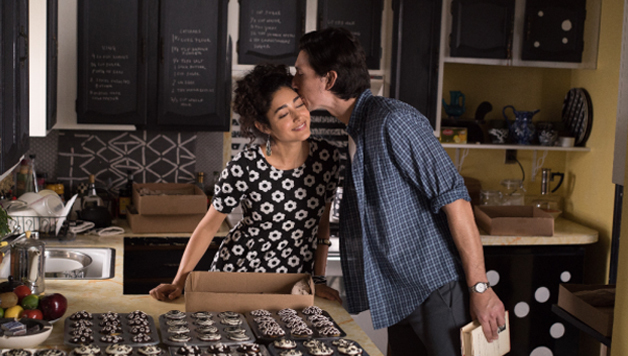 Paterson is a bus driver and amateur poet from the city of Paterson, New Jersey. Every day he follows the same routine until a small disaster threatens to shatter he and his wife’s idyll.

“Stubbornly ready to burst into flame’ writes Paterson of a match in one of his poems, but his own personality isn’t so flammable. Toting a lunch pail and wearing a blue collar to work, he lives with his partner, Laura, in a tidy home. In the very first shot, the couple are seen sleeping together, facing each like a contented mirror image. Paterson celebrates the symmetry.

The pair are deeply in love and deeply satisfied. They take pleasure in each other’s happiness and their domestic ease is sweetly authentic; their biggest crisis may be Laura’s discovery of quinoa. Paterson works and writes, whereas Laura happily pinballs from one creative venture to another, she paints, learns guitar and makes cupcakes and both Paterson and the film treat her ways with respect.

Paterson visits the same bar for one drink every day. The bar is a fantasy of sorts, but if you listen to the characters, you’ll also hear repeatedly about money troubles and heartache. The everyday is never extinguished.

Driver, holding his silence, conveys the quiet internal wonder of an artist soaking up life, and deferring to Marvin, the grumpy bulldog who treats Paterson as an interloper and gets the best reaction shots. Driver shows Paterson doesn’t judge others, but also his stubbornness and the inspiration he draws from Laura.

The movie celebrates the traditional inclusive spirit of American working life – “you name it” says Paterson’s supervisor, listing his woes at home like a 1950’s sitcom actor. The film allows you to appreciate historic neighbourhoods, busy streets and the everyday movements that make cities breathe. What a gem of a picture.