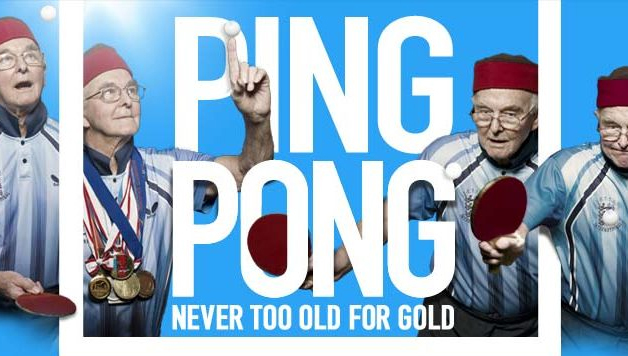 Before I gush, let me say - hand on heart - that I have NO connection with this film or its makers. I just went along to see it because documentaries nowadays are increasingly more interesting than 'real' films.

Ping Pong is no exception to that rule. It's the antidote to the X Factor - the story of eight pensioners from around the world competing in the World Ping Pong Championships in China. Each competitor is interviewed at home about their lives and participation in the sport, and we watch them prepare (or not!) before setting off.

Their stories are funny, admirable, affecting and astonishing; their characters diverse as the nations they represent. My own favourite was Inge, the German woman who was saved from what sounds like dementia by ping pong. I found myself laughing and filling up in turn as these feisty old folk set off for the contest with a range of ambitions and emotional baggage.

The entire film is uplifting and gently gripping, sucking you in to the lives and backgrounds of these people. It would be the perfect film to show schoolchildren, as it reveals old age in all its wonderful, terrible incarnations.

If only most screenwriters could capture one tenth of the emotional impact of Ping Pong, the film industry would be something to behold. You'd be bats to miss it!