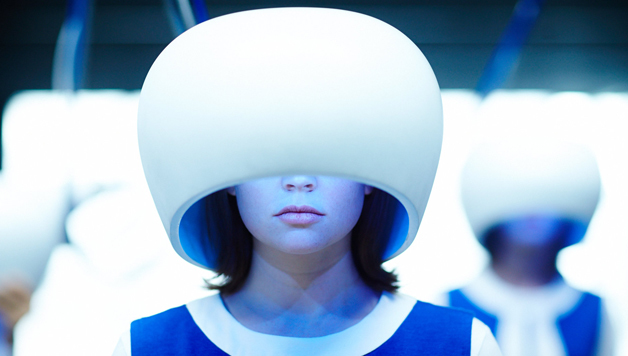 Strong sex scene and violence Australia 2014 Director: The Spierig Brothers Featuring: Ethan Hawke, Noah Taylor, Sarah Snook, Elise Jansen Language: English Running Time: 97 minutes Australian cinema’s double-act, The Spierig Brothers, ventures into the realm of sci-fi noir with their latest- Predestination. The tyro twins introduce the audience to a future-world where special agents materialise cross-dimensionally via folds in time. Having overcome the associated physical toll, these “time cops” stop crimes of the future by altering the realities of their present. A Federal Agent, Ethan Hawke, is attempting to de-fuse a bomb, the work of a terrorist known as the Fizzle Bomber, when there's an explosion and he's badly burnt. After his recovery we see him working as a bartender and starting a conversation with a strange and androgynous man, Jane, who tells him a mysterious story of intrigue, sexual identity and manipulation, who may represent "the inciting incident", but who was also one of the most fully realised characters. Jane was born in 1945, abandoned at an orphanage by one of many figures in the film whose faces you don't initially see, and remains a woman struggling in a man's world even when she becomes a man. Jane undergoes a remarkable physical transformation here, but it's the deep clarity of her emotional evolution that matters. She's haunting as someone desperate for fulfilment. Adapted from a 1959 Robert A. Heinlein short story, the narrative in Predestination jumps as far forward as 1993, but the movie's look is imaginative as opposed to overwhelming, forsaking blockbuster trappings. Hawke and Snook anchor the knotty storyline and you eventually realise key lines have a double meaning and that every occurrence fastidiously ties together. Original Review: Simon Foster - Filmink & Craig Mathieson - The Age Extracted by Mel de Ruyter