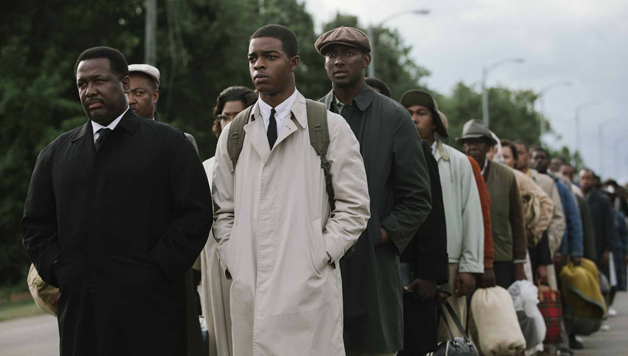 Violence and coarse language USA 2014 Directed: Ava DuVernay Featuring: David Oyelowo, Carmen Ejogo, Tom Wilkinson, Tim Roth, Giovanni Ribisi, Alessandro Nivola, Martin Sheen,, Cuba Gooding Jnr., Dylan Baker. Running time: 128 minutes In the early to mid 1960s, Martin Luther King Jnr. leads the Black Civil Rights Movement's non-violent elements in a determined push to have the voting rights for blacks given legally enforced freedom from racist barriers. One of the key protests is a 50 mile march from Selma to Montgomery, Alabama's capital. Or it would be if the racist sheriffs and Governors let it and if President Lyndon B. Johnson would only intervene. By focusing on specific events in the lead up to the change of America's voting rights act in 1965, director Ava DuVernay's powerful drama about Martin Luther King Jnr. has maximum clout. The film begins with King's acceptance of the 1964 Nobel Peace Prize and concentrates on the subsequent 12 months in which the historic march from Selma, Alabama, to Montgomery takes place, forcing change from the White House in the form of the 1965 Voting Rights act. It's a role of a lifetime for classically trained English actor David Oyelowo, whose distinguished performance ably embodies the physicality and essence of the pastor, humanitarian and human rights activist. While the film provides a backdrop depicting the political climate at the time, it also explores King the man, as he contemplates his thoughts and airs his doubts with his closest advisers at a volatile time. Context is everything and Webb's story quickly goes to the crux of the issue by describing the impossible process in place that denies the basic right for Negroes to vote. Original review: Louise Keller; Urbancinefile Extracted by: Peter Gillard