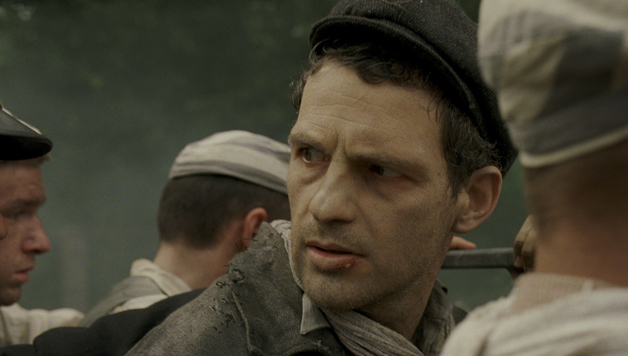 Let's start with what it's not, for fear of what it is – a Holocaust film. It's not like any of its predecessors, because it throws out all the accepted ways of making such films. It is not objective, in the sense of having wide shots of Auschwitz, sweeping camera movements, or a view from the commandant's balcony. We are offered neither the comfort of distance nor linear clarity.

It's graphic but not in the usual way. We don't see piles of bodies, either in black and white actuality or recreation. We perceive them, but the 38-year-old Hungarian director Laszlo Nemes, making his debut, controls point of view so rigorously that we aren't immediately overcome with revulsion. We're thrown into chaos instead: comprehension and reflection are not possible, because we are in the middle of something unknown, a terrible flow from transports to the "showers", shuffling forward. It's the difference between observing and experiencing.

Nemes starts the film out of focus. A man walks towards the camera, stopping when he is almost on top of the lens, now in focus. He is gaunt, grim-faced, dark-eyed, in a dirty cap and camp clothes. From here on, we almost never leave that position, at this man's side, looking at his face in medium close-up. This is Saul, a member of the Sonderkommando, the "special" force of (mostly) Jewish prisoners who worked in every phase of the extermination process.

It’s a beat-the-clock thriller wrapped around an allegory. Saul witnesses the death of a boy who may or may not be his son, and becomes obsessed with giving the body a proper Jewish burial. He scrambles through the camp, a buzzing hive of hideous and mundane routines, in search of a rabbi. He barters and begs, and his quixotic project intersects with desperate plans for rebellion and escape that other prisoners are hatching. Mr. Nemes orchestrates a tour de force of suspense, a swift symphony of collisions, coincidences and reversals that is almost unbearably exciting.