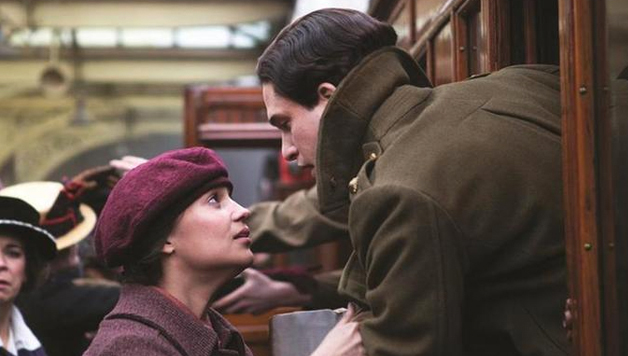 The life of Vera Brittain was shaped by a wealth of talent and an equally potent store of bad luck, all of which hit her during her 20s. Unfortunate enough to fall in love at the outbreak of World War I, she had to watch her lover, her brother and their childhood friends go off to fight –with disastrous results.

It was a devastating coming-of-age but its tragedies made her a writer. Testament of Youth, published in 1933, was immediately embraced as a seminal memoir, vibrantly giving voice to those who loved and mourned. Screenwriter Juliette Towhidi picked her way through diaries, letters, as well as the memoir, finishing with talks with Brittain's daughter, Shirley Williams, former Labour cabinet minister and baroness in the House of Lords. The on-screen Brittain flourishes. She is a hot-headed character determined not to give in to her father's wish that she sit at home playing the piano until Mr Right comes along.

Roland Leighton is a friend of her brother's and during that languorous, sunstruck summer before the war, he comes to stay at the Brittains' house in the country, winning Vera over with his own ambitions as a writer and his interest in her writing. The film makes light but effective work of mapping the social stratifications of pre-War England. The Brittains are prosperous and middle-class. The Leightons are more cosmopolitan. Roland's father is a former literary editor of the Daily Mail and his mother is a well-known romantic novelist and a potentially intimidating presence. It's a measure of Vera's independent spirit that she chooses not to be awed.

The film's second half brutally renders all these refinements irrelevant; they are thrust aside by the war. As a nurse in France, she becomes intimately acquainted with the human cost of the conflict to both sides –an experience which turns her into a pacifist. At the heart of the story is the importance of words in her life and that of Roland's, for the letters and the poems they exchange are crucial to all that they cherish in one another.