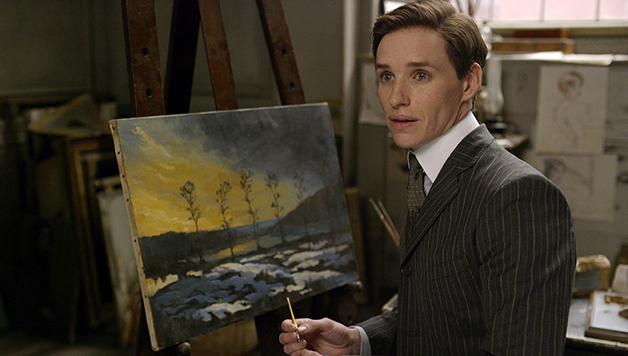 The Danish Girl follows Lili Elbe’s awakening as she comes to understand that an unfair quirk of fate has left her trapped in the body of a man, that of respected Danish landscape painter Einar Wegener. Eventual acceptance leads her to become the first person to undergo gender re-alignment surgery.

There’s a lot to like as director Tom Hooper (of The King’s Speech fame) pulls out all the stops to create an attractive and weepy drama. Every setting glimmers with the shine of quality production design, and the costumes bring to mind the roaring 1920’s parties of an Evelyn Waugh satire. In fact, everything feels remarkably British, right down to the clipped accents, which aids period credentials while somewhat detracting from the fact we’re in Copenhagen, not London. Even so, it’s hard to care when the story is powered by such brilliant performances from Eddie Redmayne as Einar/Lili and Alicia Vikander as his wife, Gerda. Redmayne blinks and stutters through his transformation, convincing as the dapper artist and newly awakened Lili.

Unfortunately, instead of trying to understand how Lili could have lived this lie, or what the impact might be on her and those close by, The Danish Girl opts to side-step, keeping the focus narrow and self-contained.

That’s the frustrating thing about The Danish Girl. It’s really a rather impressive period drama that talks the talk, and in the two leads, walks it as well. If only there could have been more desire to delve deeper. Then we might have had something really special.