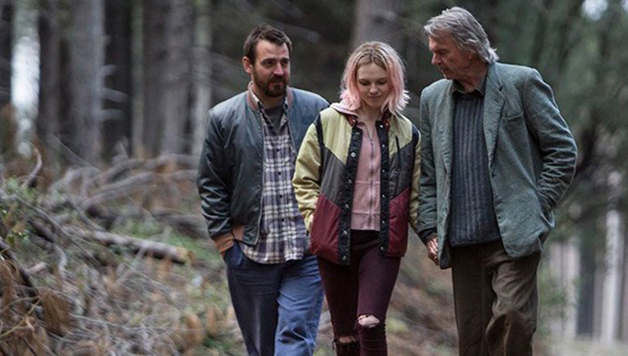 The Daughter is alternately poignant and powerful; a life-and-death drama, free of any suggestion of the theatricality of the play that inspired it, Henrik Ibsen's, The Wild Duck.

Christian returns to his Australian hometown after sixteen years away to attend the wedding of his logging magnate father to his much younger housekeeper. Unhappily married himself, and a recovering alcoholic, Christian is still angry at his father whom he blames for his mother’s long-ago suicide.

While he’s visiting town, he reconnects with his old Uni friend, Oliver and envies his peaceful life. Oliver – bearded, jovial and the nicest bloke you could imagine – now works in the logging yard and has a truly blissful family existence with his loving wife, Charlotte and their bright and beautiful teenager, Hedvig, who with pink hair, pierced nose and toothy grin gives a revelatory performance infused with the strength and vulnerability of youth. In a van out the back of their ramshackle house lives Oliver’s scraggly and forgetful father, a ruined man who keeps and rehabilitates injured animals, including a wild duck.

Over the course of the wedding weekend, resentments rise, truths emerge and lives are destroyed. A building sense of impending disaster – and the longing to avert it – drives the story from the first scene: a gunshot ringing out over a misty lake. But don’t assume you know what happens just because you’ve seen one of the many versions of the play. We are made to care deeply for these particular characters, and this specific version of what is a familiar story with classic melodramatic plot points. As Sam Neill’s character tells his devastated son, “Everyone’s got a story like this. It’s as old as the hills.” That doesn’t make it any easier to bear. This is daring, fierce, and rewarding cinema; as good as it gets.