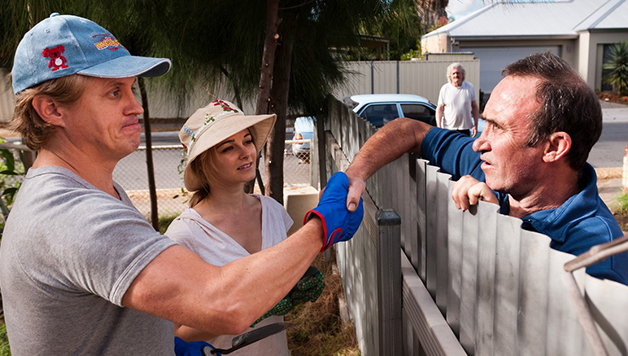 Frequent coarse language and violence Directed and written by : Rolf de Heer Featuring: Dan Wyllie, Bojana Novakovic, Gary Wadell, Luke Ford, Anthony Hayes, Lani John Tupu, Roman Vaculik, Running time: 102 minutes Therese and Max, two Adelaide yuppies who purchase a lovely federation home on a tree-lined street at the beginning of the film. They quickly become aware of their neighbours: on one side, the perfect young family of three, and on the other, a dimwitted, uncouth, drug-and-booze-addled headcase known as King whose extremely loud, uncouth, rancid, ratty, drug-dealing mates dominate his house night and day, effectively terrifying the neighbourhood. Therese and Max both pride themselves on being tolerant and patient, but the hell of next door only increases, and something has got to happen. This is a film, after all. You think you know where this is all headed, and you may be partially right, but the journey is rich, diverting, and much more surprising than you might guess. De Heer, shooting in his own Adelaide home and the houses on either side of him (!), has more than just “Lord of the Flies in Suburbia” in mind. Unlike a lot of American films, where a family under threat fights violence with extreme violence for gruesome thrills (there are so many of them, such as Fear and last year’s Nicholas Cage / Nicole Kidman turkey Trespass), the married couple here, very amusingly (the film’s tone is essentially one of very black comedy) have to work through – to fight through – their own selfimposed senses of decency, ethics and simple modern manners to arrive at any sort of action to remedy their situation. Eating healthy home-cooked dinners and never without a bottle of red wine, this is the intellectual, liberal, do-good, perfect couple struggling to find their inner beast – and failing miserably. Original Review: C J Johnson www.filmmafia.com.au Extracted and compiled by Peter Gillard