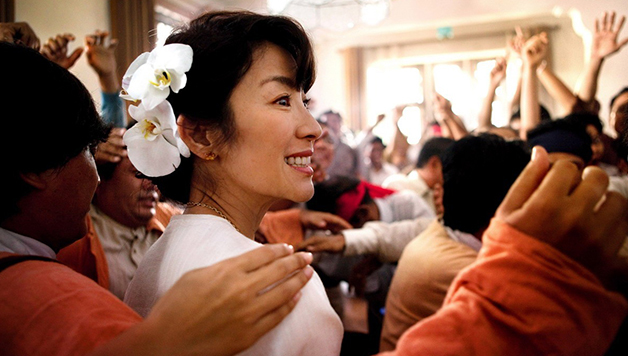 No screening Easter Monday Infrequent strong violence France/UK 2011 Director::Luc Besson Featuring: Michelle Yeoh, David Thewlis, Jonathan Raggett, Jonathan Woodhouse Lauguages: English and Burmese Running time: 132 minutes THE LADY is an epic love story about how an extraordinary couple and family sacrifice their happiness at great human cost for a higher cause. This is the story of Aung San Suu Kyi and her husband, Michael Aris. Despite distance, long separations, and a dangerously hostile regime, their love endures until the very end. A story of devotion and human understanding set against a background of political turmoil which continues today. In 1947, Burmese democracy leader Aung San is murdered, along with members of his political party. Fortyone years later his daughter, Aung San Suu Kyi, who has been living in Oxford with her academic husband, Michael,and their two sons, returns to Burma to visit her sick mother. She witnesses the brutality with which soldiers acting on orders from the military junta, crush political dissent, and she agrees to lead the National League for Democracy, as a result of which she is sentenced to house arrest.??This timely film from French director Luc Besson concentrates to a great extent on the personal story of Aung Sang Suu Kyi - her relationship with her husband, Michael, and her sons. Although this makes for a poignant film it also tends to skip over the political elements of Suu's story - there are few insights here that wouldn't be familiar to anyone who has even the most cursory knowledge of recent events in Burma. The officers who run the junta are scowling, cardboard villains, while Suu, beautifully played by Michelle Yeoh, is the epitome of grace and calm, and her long-suffering supporters follow her example. Filmed mostly in Thailand the film looks very handsome, but given the subject matter you might have hoped for a more probing look into the life of one of the great women of our age. Original Review: David Stratton ABC TV. Compiled by Mark Horner