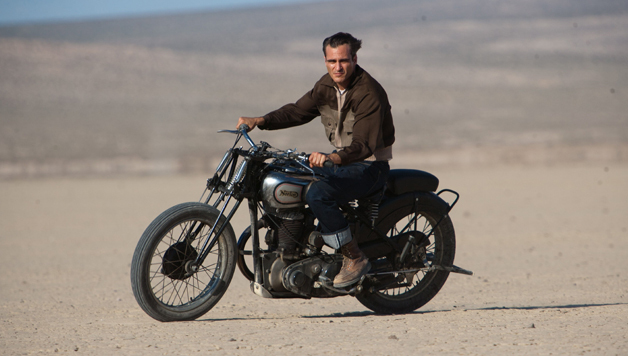 This is a superbly crafted film that's at times intentionally opaque, as if its creator didn't want us to see all the way into its heart of darkness.

It's an emotional history of charlatanism and gimcrack philosophy, a world of snake-oil truth salesmen offering selfmedication of the spirit, all set in a postwar America. In charge is the charismatic Lancaster Dodd, played by Philip Seymour Hoffman, a puce-faced public speaker who styles himself "The Master", hammy and plummy and steely.He believes in curing physical and psychological ills by rooting out previous selves and interplanetary interlopers from millions of years ago, through confrontational interrogations and therapies that are like hypnosis or recovered memory or even electro-convulsive shock treatment. The Master is amused by Quell, gets a taste for his hooch, and decides to make of him a special case for his treatment.The Master resolves to break Freddie down and build him up anew, and Quell's chaos and Dodd's charlatanism become locked together in a dance of death.

On one level this is the personal story of Quell and Dodd, and their absurd, sinister and poignantly doomed love story. Freddie's gift for brewing up moonshine out of anything to hand (paint-stripper, developing fluid, fruit, bread) and making himself the life and soul of the party is no incidental detail. His booze-genius is of course analogous to Dodd's gift for intoxicating rhetoric and ideas, cobbled together from bits and pieces of science and established religion. They are a match made in sociopath heaven. The Master is a supremely confident work: audacious and unmissable.