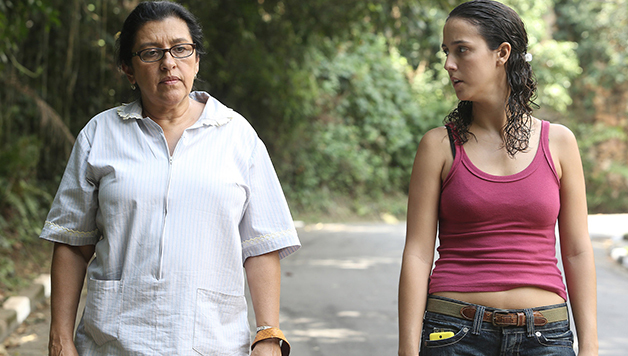 The Second Mother, a comedy from Brazil, opens as Sao Paulo-based Val chases after Fabinho, her charge, while attempting to “parent” down the phone to her own faraway daughter.

Val plainly dotes on Fabinho who, even in his stoner teenage phase, often sleeps beside the live-in maid. His birth mother, meanwhile, is a distant, ill-defined fashion icon. His father, although addressed as “Doctor” by all, is too hilariously useless to fetch a soft drink from a nearby fridge.

Val patiently and uncomplainingly tends to her adopted family unit’s needs; if anything, she’s proud to “know her place”. This class-structure compliant arrangement is suddenly threatened when Val’s daughter Jessica comes to stay with her estranged mother.

Jessica is bright and hoping to study architecture, an ambition that proves something of an affront to the affluent host family. Indeed, both mothers are appalled by Jessica’s lackadaisical attitude towards the status quo.

“When they offer us something, we’re not supposed to take it,” scolds Val repeatedly, as the class war heats up.

Writer/director Anna Muylaert’s beautifully shot, frequently comical take on the “second mother” phenomenon sets the film apart from other explorations of similar material. There’s a lot of fun to be had, even against the film’s astute observation that where women are the primary enablers of class snobbery, they can just as easily be radical dismantlers.