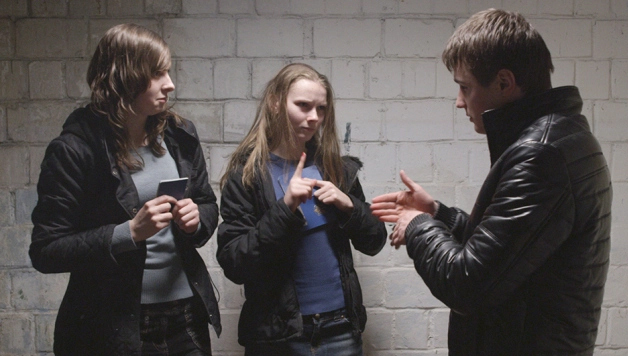 The Tribe is one of the most disturbing films of the year, its lack of audible speech puts viewers in the position of disoriented outsiders, struggling to find the clues. We’re only slightly more lost than the film’s teen protagonist, Sergey. We first see him from across the street, handing a note to a woman at a Kiev bus stop as he seeks directions to his new boarding school.

Along with Sergey, we begin to find our place, which is not in anyone’s comfort zone. Essentially, this is a prison movie that happens to be set in a school. The pecking order is clear through the characters’ gestures, facial expressions and body language. The snarling leader is obvious from the swagger, the forward thrust of his shoulders and angry, chopping gestures. Unlike other prisons, the inmates move freely in the neighbourhood, stealing possessions from train passengers and viciously mugging and beating men outside liquor stores. Their steady income comes from selling two girls as prostitutes at a local truck stop.

Sergey, after taking the required initiation beating, works his way up the chain of command to chief pimp for two girls, Anya and Svetka. The transactions are eerie, conducted by hand-written notes and exchanges of cash. His predecessor on the job dies in a startling fashion, though not surprising when you realise deaf people can’t hear a truck’s back-up signal. While the initial impression is that adult supervision seems improbably light, we eventually understand why: the School Administration is in on it.

A shop teacher, who collaborates with the boys on their pimping runs, arranges to get passports to send the girls to Italy. But Sergey, after buying a sexual bout with Anya, falls in love with her. He doesn’t want her to leave, but having broken the Tribe’s code, he becomes a pariah.