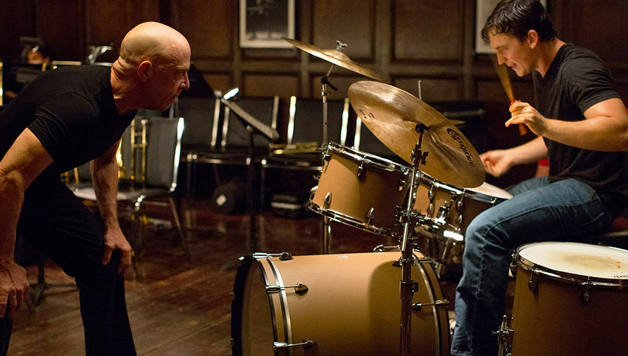 Strong coarse language USA 2014 Director: Damien Chazelle Featuring: Miles Teller, Melissa Benoist, J.K.Simmons, Austin Stowell, Chris Mulky. Running time: 107 minutes A promising young drummer enrolls at a cut-throat music conservatory where his dreams of greatness are mentored by an instructor who will stop at nothing to realize a student’s potential. This is one of the more raved-about art films from 2014. Miles Teller is Andrew, a drummer with a dream. He wants to play in a swank music programme taught by its prestigious leader, Terence Fletcher (Simmons). Once an invite is issued, Andrew often has second thoughts. Fletcher is a sociopath who is alternately abusive and encouraging to his students, Andrew in particular. To the picky professor, perfection is impossible, and a drum stroke a millisecond off leads to tirades with epithets, slander and threats. And it goes on for a bit over an hour and a half. Andrew is up, then down. Fletcher is nice, then naughty. In the middle is some pretty good jazz and an opportunity to watch two very good actors dual in a so-so plot. Teller, who is actually a drummer, isn’t bad. Research says he does all his own playing, but in pieces. As a drummer myself, I’m not so sure. However, as an actor, Teller is one of the best of a new crop of young people willing to stretch and take difficult roles. He’s wonderful in this one. While both actors are getting rave reviews, Simmons took home a best supporting actor Golden Globe and is said to be a lock for an Oscar in the same category. To say he’s brilliant – as is Teller- is an understatement. Do see this for the acting alone. Original review: Gary Woolcott, Tri-City Herald Extracted & Compiled by: Mark Horner